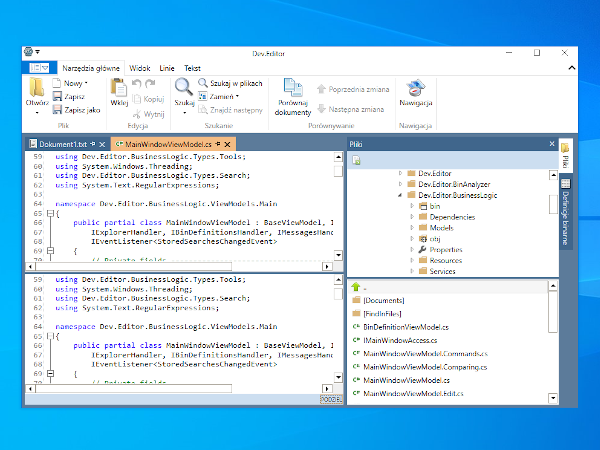 Dev.Editor is a developer’s editor – a replacement for such programs as Notepad++ or Sublime Text, and a spiritual successor to SpookEdit, which I used to develop. It has no ambition to compete with various IDEs – for example, Visual Studio Code – but rather to be an extended version of Notepad, allowing for easy modification of configuration files, viewing logs or simply more or less advanced text processing – which activities in programmer’s everyday work are very common. In addition, it also offers several features that you won’t find in any competing program.

This program is also an experiment in the field of user interface – it is the world’s first programming editor equipped with a modern interface proposed by Microsoft, i.e. Ribbon. My erstwhile concept of introducing this element to the programming editor was once strongly criticized: so I leave it up to the evaluation whether this idea worked.

In Dev.Editor you will find most of the standard functionalities that are found in this type of programs, i.e. multi-language syntax highlighting, code folding, editing files in tabs in two independent views, built-in file browser, advanced search mechanisms, split file editing view and other. But apart from that:

After enabling the appropriate option in the program configuration, it will remember the state in which it was closed and restore it after re-opening. This includes all open files, their current contents and state (that is, a file with unsaved changes will still have unsaved changes). This speeds up work (the program closes almost immediately) and allows you to use the editor to take quick notes. 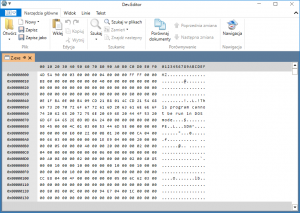 Unlike many editors, Dev.Editor comes with a built-in hex editor. What’s more, it offers a feature rarely found in many hexeditors, i.e. an input mode. Thanks to the optimized implementation, you can insert bytes even inside very large files.

The hex editor is included in the Dev.Editor source code as a standalone WPF control, so you can use it without major problems in your own projects. 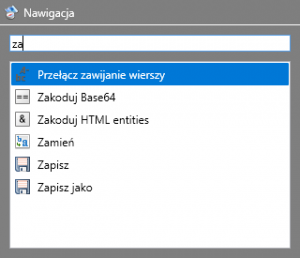 Dev.Editor contains navigation mechanism known from Visual Studio Code. After pressing the Ctrl + P combination, the navigation window appears, in which we will find all the commands that can be executed in the program. In this way, we can perform various operations very quickly without having to take our hands off the keyboard. 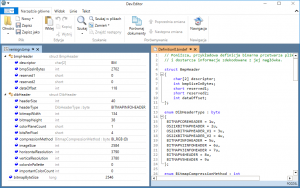 If you are working with binary files in your project, this feature may be useful for you. It allows you to define a binary file format in a C-like language and then decode the file according to that definition. This way, you can quickly open and view binaries for various information. 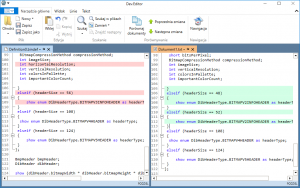 Dev.Editor allows you to quickly compare two text files. This is not a mechanism as extensive as the one found in the great P4Merge, for example, but in most simple scenarios it should be more than enough. 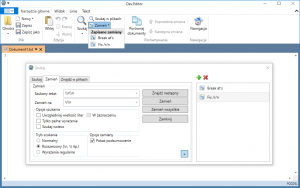 Do you search for a phrase or perform a specific replace operation frequently? Save it and recall it very easily.

Dev.Editor is free and open source. If you want to view its code, you can find it on GitLab. If you want to test it, you will find the appropriate download link in the Download section of this website.

What do you think?

Do you like Dev.Editor? Let me know in the comments.