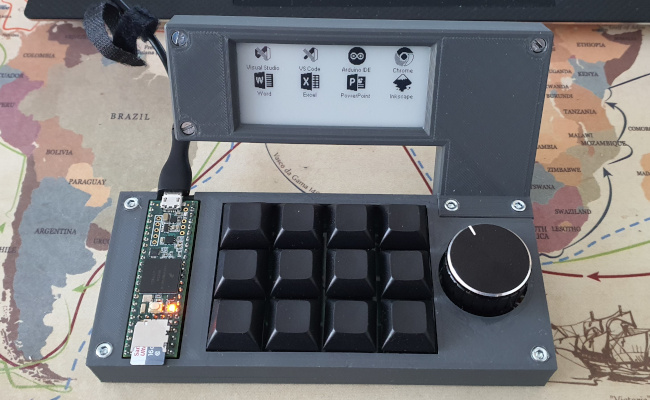 Do you know Elgato Stream Deck? It is a fantastic macro keyboard consisting of programmable keys displaying custom images. It allows you to automate numerous things including entering key sequences, running programs or websites, controlling specific software and more. Moreover you can extend its capabilities by writing your own plugins. And don’t get fooled by the “stream” in its name. Even though it was initially created for content creators, it serves fantastically as a productivity tool.

There’s only one downside of this fantastic keyboard: the price. The most reasonable, 15-key version costs around 150€, which sometimes may be a deal breaker. So I decided to create such macro keyboard on my own.

Designing buttons, which display an image underneath is not simple (Stream Deck actually does it with only one screen in quite an ingenious way). I saw one DIY approach named FreeDeck, but ultimately I decided that this is not the way I would like to go. Firstly, it has only 6 keys (because of screen board sizes), secondly it treats goldpins as springs – every screen press causes stress on the pins, which may eventually start cracking. Also, LED/OLED screens tend to wear off in time – especially if they display the same image all the time. Stream Deck counters that by allowing you to set a delay, after which the screen is turned off. You can turn it back on by pressing any of the keys.

One is using an e-paper screen, which displays labels for keys. However, they are not displayed underneath the keys themselves, but instead I show them above them, in the same layout as the keys. So effectively, top-left icon describes top-left key and so on. Surprisingly, this works quite well, you quickly learn, which button represents which feature.

Another approach is a screen-less keyboard. Apart from an obvious lack of the e-paper screen, the design is exactly the same.

I figured, that the device without some form of displaying labels for buttons represents a fraction of its capabilities. The sole purpose of using such keyboard is so that you don’t have to remember things (eg. shortcuts), so now having to remember which key does what hinders its usability. Moreover it is hard to use more than one layout, because you have no way of knowing, which layout is currently active. So to counter this problem I modified the software for the keyboard and also wrote a desktop application, which acts as a satellite. It connects with the keyboard with a COM port and displays on screen contents of what otherwise would be shown on the e-paper display. Moreover, if you hold any button for more than half a second, screen is temporarily displayed for you, so that you can quickly check, which button you need. 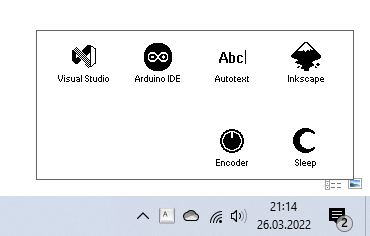 The Stream Deck requires a satellite application to be running at all times. Moreover, it stores layouts of buttons on the computer, so if you connect the device to another PC, you will have a completely different set of keys there. Obviously, you can synchronize layouts between devices, but this requires some more effort.

On the other hand, in my case, the layout is stored on the SD card, which you put in the keyboard’s reader. Thanks to that, you can use the same layout regardless of which machine you connect the keyboard to.

I made my keyboard opensource (both software and hardware). You can build your own unit by following the tutorial.

Components required to assemble the keyboard are the following.

If you want to assemble version with e-Paper screen, you need as well:

Note that if you use my designs, you may add the screen at any point in the future. Just buy missing parts, solder pins for the screen, connect it, assemble everything again and burn different version of the firmware.

If you want to use my enclosure, you also have to either 3D print it or order a print.

Clone my repository on Gitlab.

In the cloned repository, in Board folder you can find a couple of files describing the PCB. You can either open them using Autodesk Eagle or simply use provided Gerber files to order a board.

You have to solder the following components:

If you are assembling version with screen, screw the screen into its case with screws, which are provided with the screen itself (M2s). Remember to connect the screen’s plug before screwing it. Afterwards, screw screen’s case.

Then connect the screen to the board. Use the descriptions on the board to connect proper pins (colors of wires may differ from the version I used).

Screen case provides enough space to push the wires inside, so they don’t clutter the main board.

When everything is screwed on, put Teensy into its socket, put on the keycaps and encoder cap. You’re done with the assembly!

MacroKeyboard folder contains application for the keyboard itself. Use Arduino Studio (along with Teensyduino loader) to burn the software into the board.

Software is designed for both screen and screen-less version. However depending on which version you want to use, you have to set one thing in the code.

Macro keyboard loads screen layouts from a binary Keyboard.def file. To simplify creation of this file, you may define layouts in XML format and then use the MacroKeyboardGen console tool to convert XML to binary.

The sample XML layout definition may look like following:

The definition consists of the following tags:

If you want to use version without screen, compile and run application in the folder MacroKeyboard.Satellite. Note: it requires .NET 6 to run (you can download and install it freely though). After starting, right-click its icon in the System Tray and choose proper COM port, under which your Teensy is available. If you are not sure, which one is it, simply try all one by one until you find the proper one.

To check if port is valid, press and hold any key on the macro keyboard. If you chose the proper port, keyboard’s screen should be displayed just above the System Tray.

If you reached this step, congratulations! You have just assembled your own macro keyboard. If you did, make sure to send me a message with photo, I will gladly show a gallery of successful builds. Also, if you have trouble building your keyboard, leave note in the comments, I will try to improve the description or answer any questions you may have.